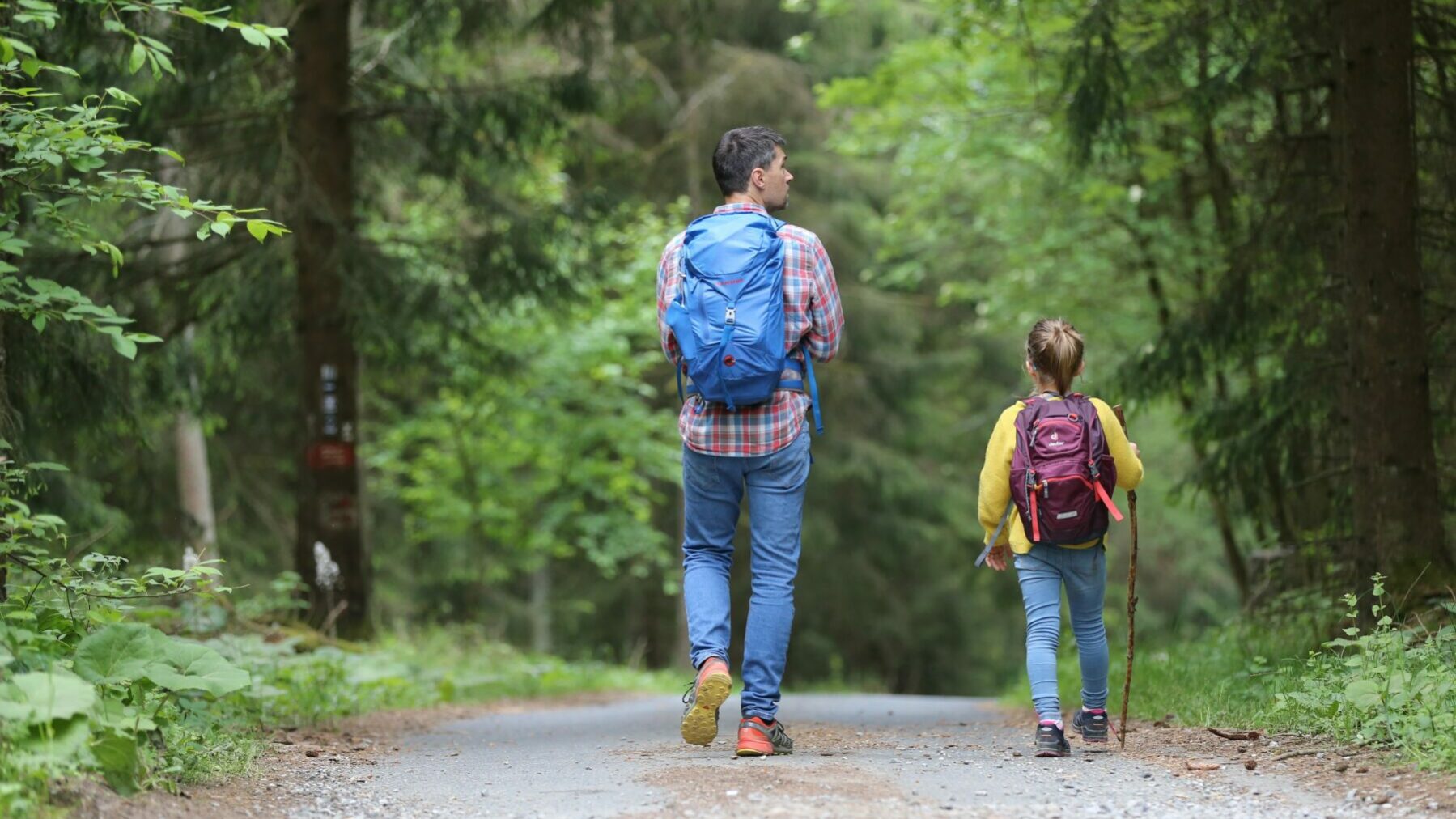 With mild weather and a nip in the air, Fall is the ideal time to get outdoors. Whether you are longing for a peaceful, scenic stroll, a rugged hike for experienced trekkers, or something in between, southern Indiana has an abundance of tours, paths, and trails to suit everyone’s skill and energy level.

Hikers have so many choices of strenuous levels among the trails in southern Indiana. For the most experienced hiker seeking a long, rugged backpacking trek, check out the Adventure Hiking Trail (AHT) at the O’Bannon Woods State Park in Harrison County or the even longer Knobstone Trail which starts at Deam Lake State Recreation Area in Clark County, just north of State Road 60.

In Harrison County which lies in the central and extreme southern part of the state, the Adventure Hiking Trail is one of Indiana’s longest and most scenic backpacking experiences, with several points of interest along the way. Normally taking 2.5-3 days to complete, there are five overnight shelters available to hikers on a first come, first use basis. This trail features a variety of land formations and landmarks including dramatic cliffs, sinkholes, ravines, and old pioneer homesteads. Marked with white and green blazes, this trail is easily navigated; however, good physical condition, plenty of water, and proper equipment are necessities. Day trips are possible at several access points. Contact the park office for more information.

Likewise, The Knobstone Trail is for experienced trekkers in good physical condition. The longest hiking trail in Indiana (41 miles), this trail will challenge stamina, endurance, and physical fitness.  Due to the rugged terrain, advanced hikers train on this trail as they gear up to conquer the Appalachian Trail. At a slower less competitive pace, The Knobstone Trail is great site to hike, camp, and fish for several days with friends and family – even those of the four-legged variety.

For more casual “weekend warrior” hikers, Southern Indiana parks offer trails at an array of skill levels. These parks feature scenic trails that vary from comfortable to vigorous, and from short to multi-mile. Customize your hiking adventure by exploring these southern Indiana parks. 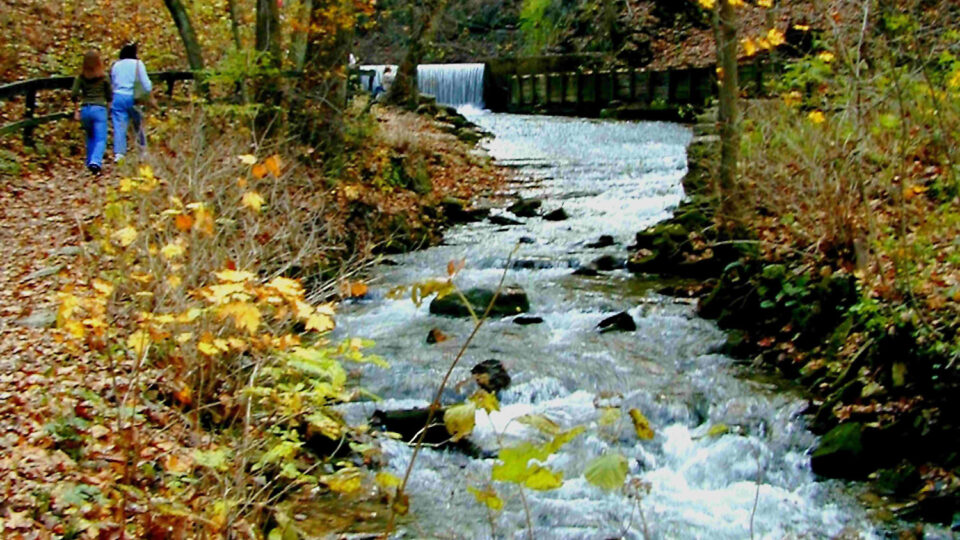 Eagle’s Bluff Park and Overlook in Cannelton, on the Ohio River

With so many health benefits to walking, why not enjoy your walk to the fullest where the surroundings are sensational? A paved, flat surface with gentle inclines and inspiring sites along the way are just what the doctor ordered. Did you know there is a paved walking path that meanders from downtown French Lick through the grounds of the resort, an expanse of woods and meadows then onward to West Baden? Or have you seen The Christ of Ohio majestic statue? To find it, take a pilgrimage from Troy along the Ohio River and venture up Fulton Hill.  You will find the impressive 19-foot statue in a serene setting among flowers, foliage, and overlooking the river. 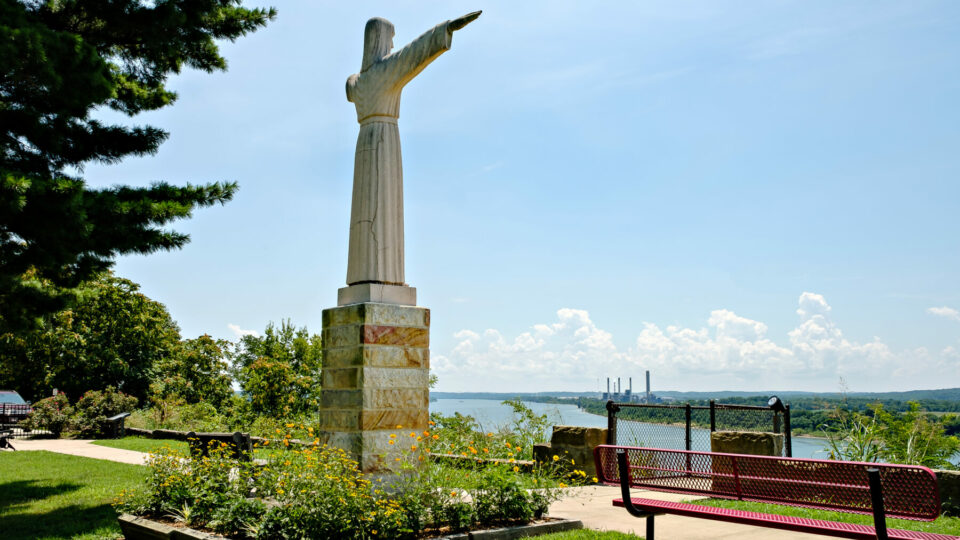 Christ of the Ohio

Here are more southern Indiana locations with walking paths that just might motivate you to tally up a few more steps and snap some scenic selfies along the way.

The Milwaukee Trail in Bedford, south of Bloomington.

The Parklands of Jasper, southwest of French Lick

Sometimes a slow and steady stroll among historic sites, gardens, and nature is good for the soul. In particular, why not take a soulful saunter through the Saint Meinrad Archabbey in Spencer County? One of only two operating archabbeys in the US, over 80 monks live on-site. Guided tours are offered on Saturdays, but visitors can walk through the grounds daily. 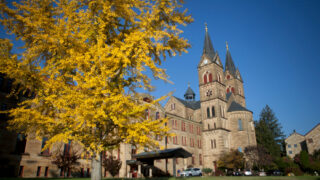 The Mansion Row Historic District in New Albany (listed in the National Register of Historic Places), across the river from Louisville

City of Princeton Walking Trail, southwestern edge of Indiana, near the Illinois border 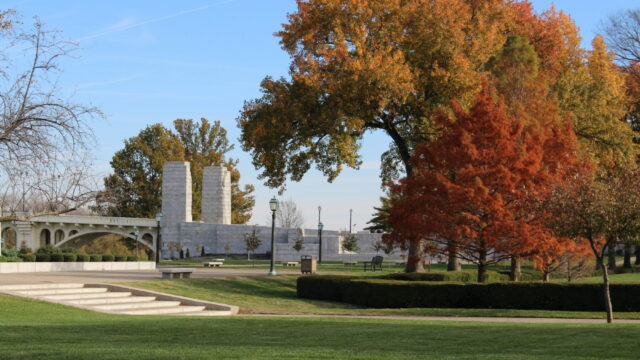 For every pace, southern Indiana has a place for you to get a “good stretch of the legs” or a vigorous workout on a rugged trail. Wherever you go, Hoosier Hospitality and spectacular southern Indiana scenery meet you and inspire your journey. With so many options, plan your trip to Southern Indiana now and hike, walk, or stroll.

Your Most Cherished Gift-Giving Originates in Southern Indiana
November 15, 2021

There Is Still Time For Summer Family Fun in Southern Indiana
July 21, 2021
Join Our Newsletter
Get our latest travel tips, news, event information, and special deals on trips to Southern Indiana right to your email inbox.
Categories
Archives
Go to Top