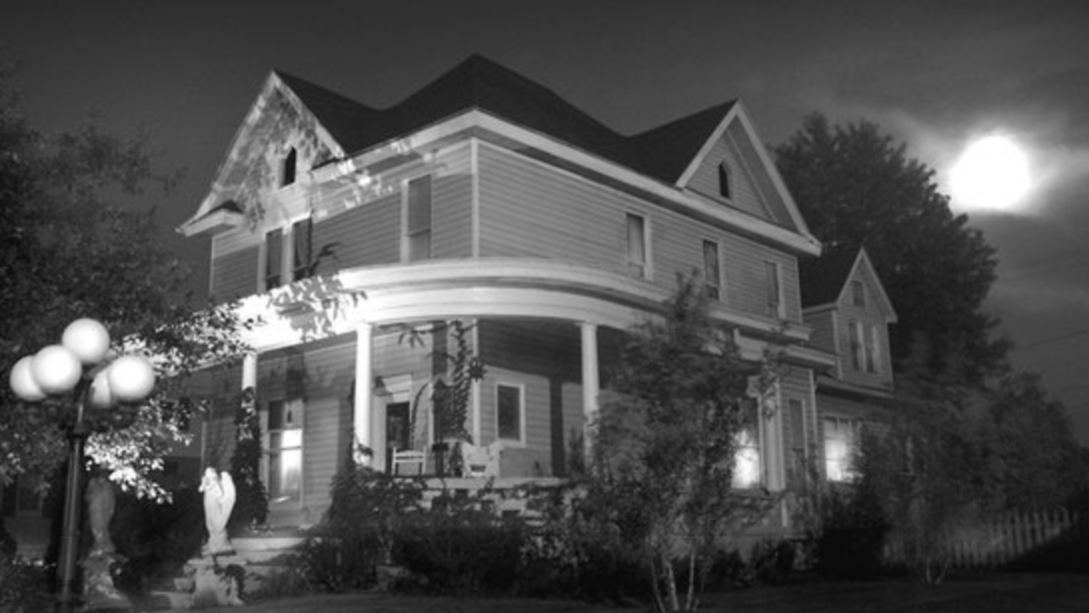 This time of year is the time for all things ghosts, goblins, and ghouls and do we have a Southern Indiana haunted tale for you! Residing to this day in Mitchell, Indiana in Lawrence County is the famously known, haunted Whispers Estate. Still standing tall today as a bed and breakfast, the Whispers Estate was originally built in 1894 and is reportedly the site of ghostly encounters!

This extravagant manor was purchased by Dr. John and Jessie Gibbons in 1899. Dr. John Gibbons was a well-known, highly accredited doctor in town, but his home was full of tragedy. Dr. Gibbons saw patients in his home office on the first floor of the estate. The Gibbons were known for adopting orphaned children and accepting them into their homes as their own. Unfortunately, the Gibbons’ 10-year-old daughter Rachel started a fire in the parlor shortly after moving in, was severely burned and passed away two days later in her upstairs bedroom. They say that you can sometimes see her running around the house to this day.

Although Rachel’s death was tragic, the unfortunate family deaths do not stop here. The Gibbons’ 10-month-old infant daughter, Elizabeth, died an unusual death in the master bedroom. The cause of her death remains unknown. Jessie Gibbons suffered terribly from double pneumonia, leaving her to die in the same bedroom as Elizabeth.

Some guests that sleep in Jessie’s master bedroom report waking in the middle of the night to labored breathing and coughing. The most common paranormal activity that has been reported in the master bedroom is the closet doorknob will frequently jiggle, suddenly stop and the closet door will pop open. This has been reported to occur 5 times within a couple of minutes and required the guest to close the door after each time it happened. These are only some of the reported haunted activities from when guests spend an evening at Whispers Estate.

Guests that are brave enough to sleep in the third bedroom report waking from horrible nightmares and can sometimes hear someone attempting to open their bedroom door in the middle of the night. Guests claim to see beds and couches visibly shaking. It has also been reported numerous times that a ‘shadow’ lurks throughout the house, but can most commonly be found in the Dr. John Gibbons’ office.

The Gibbons family story is very interesting; however, it is not unique. Many other families who lived in Whispers Estate over the years have experienced similar trauma and death. A gentleman who lived in the estate in the 60’s died in the upstairs bathroom. Later, another young boy died from mysteriously falling down the front staircase. Whispers Estate was recently renovated in 2006, and during its restoration, strange activity was reported. Whispers Estate earned its name due to guests repeatedly reporting hearing disembodied voices whispering in their ears during their stay.

Do you have what it takes to stay the night at Whispers Estate in Lawrence County? This time of year is an exciting time to find out!

To learn more about the history or Whispers Estate or to book a reservation and see if you have what it takes to stay at the haunted mansion, click here.

Escape the Day-To-Day with a Casino Getaway in Southern Indiana
October 24, 2022